Yet another League of Legends animation

This happens every time you waste your Ult. A Five Nights at Freddy’s 2 Animation

New animation Fortnight at Freddy’s (A Five Nights at Freddy’s 2  by Scott Cawthon), now on Steam.

In Five Nights at Freddy’s 2, the old and aging animatronics are joined by a new cast of characters. They are kid-friendly, updated with the latest in facial recognition technology, tied into local criminal databases, and promise to put on a safe and entertaining show for kids and grown-ups alike!

What could go wrong?

As the new security guard working nights, your job is to monitor cameras and make sure nothing goes wrong after-hours. The previous guard has complained about the characters trying to get into the office (he has since been moved to day-shift)...

For all of you Freddy’s fans out there… 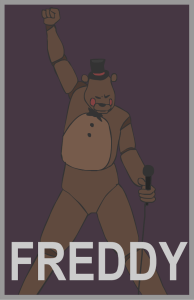